I feel that I have finally made a start on the shower room project, but almost exactly a year behind schedule. 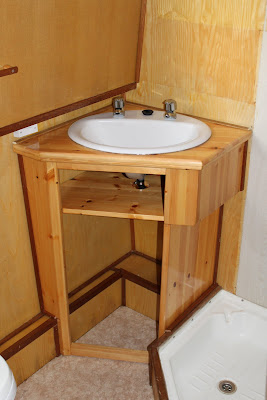 Those of you that know me personally will appreciate that the last 12 months have been far from easy, and as a result a great many things have had to be left undone.

The catalyst for this burst of energy was the availability of a spare basin from Bones, which I picked up in the summer recognising it to be absolutely perfect for the project I had in mind. Not only was the basin the right size, it even came with taps and a boat sized spiggot out of the bottom. (I like the word 'spiggot'. It rolls round the tounge so nicely - it's the sort of word Blackadder would revel in).

Amazingly, the unit actually fitted very well on the test run so I varnished it up and took it down to the boat for screwing in properly, also adding the basin and taps. I figured that this wouldn't be more than a 2.5 hour job, so I put my bike in the car to do a little exploring around Sneyd Junction. Silly me, I forgot that the task included plumbing and, of course, I got a leak! 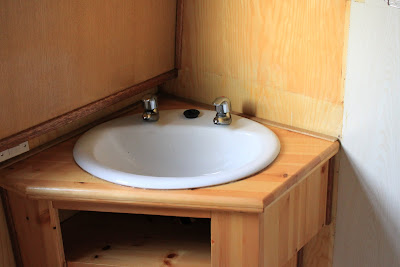 Whilst the unit went in like a dream, and with a bit of adaption and plumbers tape the waste water pipe was connected ok, could I tighten up the nuts under the taps, or more importantly, could I do up the water pipe nuts? could I buggery! No matter how I tried I couldn't get a spanner or a mole grip onto them, and by this time the basin was bedding down nicely into a thick layer of silcone.

Hand tight was no use, so I had to resort to prizing the basin up off the drying silicone, removing the top of the unit, and then assembling the thing standing on its edge - only rescrew the surround back down onto the carcas when all was fitted, sealed and bolted together. So much for my smooth bead of silicone. Much to my surprise I noticed that the sun was setting when I started to pack away my tools, that 2.5 hour job had escalated to 5 hours, leaving no time for a bike ride. Never mind, Lord Hay's Branch Canal will still be there another day.

The end result looks good, and the taps / basin all work perfectly. As for the silicine bead, it's a little bit bumpy here and there, but with a bit of careful trimming when it has cured it will look just fine. No door yet, but I will make that when I make the one planned for the angled cupboard over the basin - the next project.