When a knight won his spurs, in the stories of old,
He stayed out of Titford Pools, just like he was told.

If you manage to get your boat to Titford Pools you really have won your BCN boating spurs. 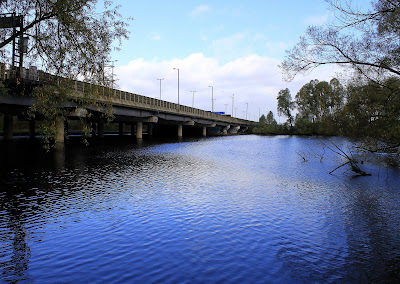 These mysterious pools sit at the top end of the Titford Branch, which rises up from the Old Main Line at Oldbury through six locks knows curiously as 'The Crow'. I have absolutely no idea why they are called this, but no doubt the archivist of the BCN Society, which uses the pumphouse at the top as a HQ, will be able to educate me.

The pools, at the highest point on the BCN, were designed by Brindley as a reservoir to help supply the Rotton Park Resrvoir which in turn supplied the New Main Line summit via the Engine Arm.

These pools played host to one of the early IWA National Festivals, but what with the silt and the road noise from the M5 which crosses the pools on stilts, it is hard to imagine them being used in the same way again.

Entrance to the northern pool

Whilst both pools look tempting to boaters that make it this far, don't stray into them. They are horribly shallow and choked with soft mud which has ensnared many boaters over the years. The mud appears to be bottomless and can swallow a whole boat pole, denying those stuck the usual means of escape. 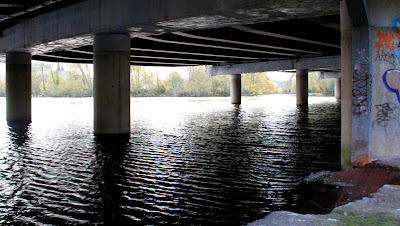 A less attractive view of the southern pool, taken under the motorway

That said, there is a certain windswept beauty anout the place, popular with ducks and fishermen, leading on the the delights of the abandoned Portway and Causeway Green arms.

On the day of my visit I was surprised by the beauty of the southern pool, where the reflections of the sky made even the M5 appear an object of beauty. I like the first photo so much I feel it could grace a calendar, but I can't think of any organisation peverse enough to celebrate this particular spot. BCNS perhaps?

By coincidence I was looking at the Titford/Portway/Causeway Green just the other night on Google Earth.
At the June BCNS rally, I took North Star cautiously right up to the narrows by the M5 bridge, but the depth went from 3' to 1' like a wall. I went further than the BCNS work boat Phoenix who were turning with trippers at Uncle Ben's.

The following day I decided to try and trace the Portway Branch as far as I could. Sadly a gaggle of territorial geese standing on the path wouldn't give way and I barely got 30m past the M5 bridge.
I am hoping ar to take North Star into both Titford Pools.

I recall someone saying that it was originally just the top lock that was called the Crow, and that was because from the lock you could see another canal far away in the distance but it looked down below so this was The Crow's Nest. However, the branch in Albrighton & Wilson is also known as the Jim Crow Branch (entrance still visible between third and fourth locks) and so this might be a more prosaic reason!

I see from Google Earth that the original line of the Portway Branch is still very clearly visible. The big electricity pylon is in the very junction of the final arm (which twisted north at this point). The Newbury Lane Colliery basin was where the track ends by the allotments.

I can't place the Samson Colliery which was served by tramway from the Churchbridge Colliery basins (back at the pylon) but I have just seen that there are plans of all these mines in the National Archives, but also colliery records in the Staffordshire Record Office.

On the Causeway Green branch, again almost the entire branch is visible from my seat in the google Earth satellite. After ploughing under the M5, the canal turns south-east to end - after the railway - at the junction of Cakemore Road and Penncricket Lane.

If I didn't have to take the boat to Braunston and back tomorrow, I think I'd drive over!