Whilst I took a look at the Wednesbury Old Canal in my entry about the Swan Arm, describing it's origins as part of Brindley's original plan and it's start at Spon Lane Locks, at least half of this venerable waterway now lies high and dry beyond Swan Bridge Junction. Overall this canal was about 4.5 miles long in its original form.

If you are visiting by boat you will need to moor up in the winding hole of the Swan Arm (not much likelihood of impeding the progress of another craft) and proceed on foot or on two wheels. 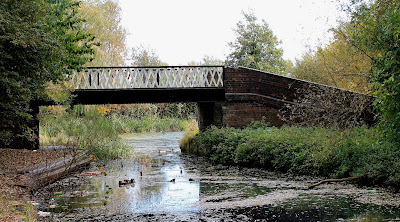 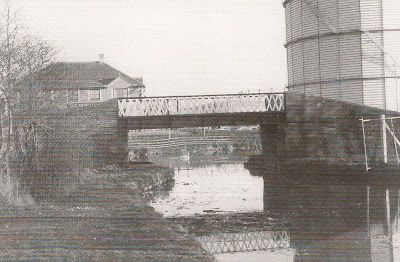 and the same scene just 10 years ago.

Taking care not to follow the alluring Ridgacre Arm to the right of the pub, you will find an attractive iron bridge to its left, spanning a short interchange basin, which remains in water. The continuing course of the Wednesbury Old Canal lies through the trees, preserved as a footpath with raised banks either side. 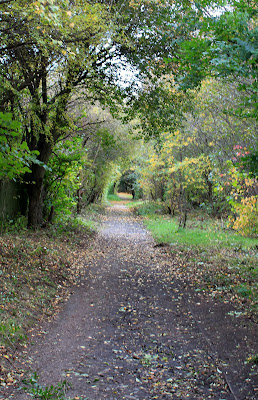 This path continues for half a mile or so before the canal line disappears into a modern housing estate which utilises the grassy banks at a telly tubbyesque communal open space.

Rolling slopes created from the banks of the Wednesbury Old Canal

For the purposes of this expedition, the open space marked the end of the road.

Whilst the next few hundred yards have been built over, as has a short arm which now forms  Dial Lane, I  have compared my trusty 1860 map with the ariel photos on Google Earth and can see the line of the canal  resuming as it loops round in a clockwise  direction for 200 degrees or so. However, the line seems to offer little prospect of a linear walk as  much has been transformed into roads and curving buildings, with just odd bits of linear woodland here and there. The site of Balls Hill Basin is very clear, right beside the railway line, but probably fenced off and beyond my reach.

I have heard rumours of an abandoned aqueduct on this stretch, which would be a good one for my collection if I can locate any remains. Does anyone know where it was / what it crossed?


If any of you guys have any images or history of this waterway please post me a comment and I will add the content to this record (giving you due credit of course!)

I have searched this evening for an article I have read in the last year about someone who traced the full length of the Balls Hill Branch. It had photos of the aqueduct over the railway, and IIRC it was removed around 1960. I can't find the article now (perhaps it was in an issue of Boundary Post but I cannot find it!!)
In that article, I am also sure it mentioned that the foundations of the aqueduct were still visible as was the 'contour' of the canal bed in the cutting profile.

In describing the WOC as starting at Spon Lane, is this really the case? I was under the impression - admittedly from memory - that it was the mines (about eight of them) in Wednesbury that provided the source of the initial coal that were the first cargos into Birmingham at the very, very beginning. Although the objective was Wolverhampton, the initial Cut was simply Wednesbury to Birmingham.

Mark
I have had a look at the on line copies of Boaudary Post and can't find it either. It's the sort of item Ray Shill would have written.

I guess you are sort of right about the start of the WOC in so far as it was the first phase completed and was then known simply as the Birmingham Canal. I was thinking along the lines that when Brindleys canal vereered off from Spon Lane to Oldbury, the descent down Spon Lane locks ultimately represented a branch - to be known as the WOC. Maybe my lazymans research (Wikipedia http://en.wikipedia.org/wiki/Wednesbury_Old_Canal)has led me astray!
Andy

Andy,
I'm trying to add up some of the implied facts. The distance was 5 miles from Friday Street, the day it opened....so where -exactly - would 5 miles of original canal end up.

Mark
The word exact always strike fear into my heart! I estimated the length of the WOC from the top of Spon Lane Lochs at about 4.5 miles based on the Wikipedia entry, but if I refer to Bradshaws 1901 Guide to the BCN, it is 6 furlongs down to Pudding Green Junct and then another 2mls and 5 Furlongs to the end of the canal - a total of 3 miles 3 furlongs.
As to the original 5 miles from Friday Street that is problematic. Bradsgaws places Pudding Green Junct 5m 5f from Paradise St, which is a little bit further out than Friday St, but as this was recorded in 1901 it would have taken the main line route and ignored the Oozells, Icknield, Soho, and Cape loops, plus probably the extra length of Brindleys old high level Smethwick section.
Having resorted to a bit of string on the BCN Geoproject map the old Brindley route from Paradise St to Balls Hill has to be somewhere between 9 and 10 miles - 5 miles only takes you as far the Summit Tunnel at Smethwick.

Found the 'article'.
In fact it is pages 19 to 21 of Eric Richardson's 'In Search of The Lost Canals of the Black Country', published by The Black Country Society in 1996.
In 1995 he not only describes the aqueduct (although long gone by then) but he does two sketches of it (p23 and on the back cover.
He has an excellent sketch ma and describes in great detail the then current state of play. He implies (as someone else does too, I recall) that the bridge over the Halford Branch is actually still there but filled in. The junction of the Halford and Jesson Branch would seem to be in the angle of Church Lane and Gladstone Street.

My guess is that the Jesson branch ended at Greswold Street. From GE it looks as if there is a deliberate line along which houses are not built, even to the extent of turning one building through 90 degrees to avoid it being partially over the line of the Cut. Perhaps that's just my imagination.
I did also wonder if there might be physical evidence of the end of the Halford branch in the open space opposite the southern end of Tiverton Drive.

Andy,
I guess the '5 miles' was just a journalist asing "Where's the coal come from?"
Answer "Oh about 5 miles away from over there"
"Ah. Thank you my good man"

Mark
Would you believe it, I came across a reference to Eric Richardson's booklet during my search and bought a copy - It arrived three days ago and I promptly added a copy of his drawing to my aqueducts blogsite "ukaqueducts".
I suspect that he would have loved to have Google Earth at his fingertips when planning his Black Country canal walks!
With the benefit of ariel photos, your comments and ER's sketches I can feel another visit to the area coming on.
Andy