I have always found a strange contradiction in the naming of the BCN canals. How do you go from the hyper functional Dudley Number 1 and 2 Canals, through the Stourbridge Extension Canal to the gloriously titled Bumblehole and Boshboil Arms?

I guess that it's all part of the rich tapestry of the canals the old boaters used to collectively refer to as the "Back o the Map", by which I mean the waterways which existed to the west of the Netherton / Dudley ridge. 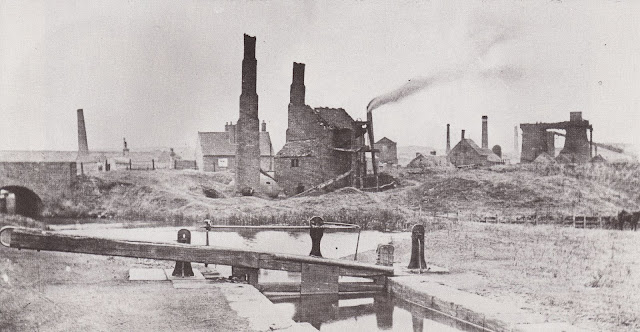 The canals on this side of the Black Country started out is independent waterways, later connected to the BCN via the Dudley Tunnel and then, after amalgamation, became part of the Birmingham Canal Navigations.  They became more closely linked via the Netherton Tunnel, the last major canal tunnel built in Britain.

As seen elsewhere in the BCN territory, the industrial heartbeat of the region slowed and with it the arteries feeding the activity silted up and fell into disrepair. The growth of leisure boating arrived just in time to save some of the canals which were almost beyond life support, but sadly others, mostly the branches serving long dead industries, faded away altogether.

The following links will take you to individual pages containing archive images of these lost sections of our historical heritage.

4. Lapal east
5. The Delph
Click here to return to the index page

The above photos have been assembled from various sources, including those freely found on the internet. My thanks go to the many photographers alive and dead who have contributed to this collection and in so doing, are keeping the memory of these lost canals alive. These images are reproduced for ease of research are are not necessarily the property of this blog, and as such should not be used for commercial gain without the explicit permission of the owner (whoever that may be).
Posted by Andy Tidy at 8:05 am